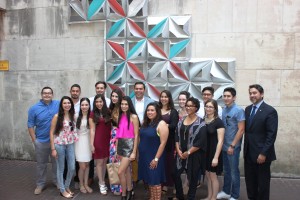 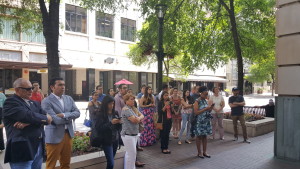 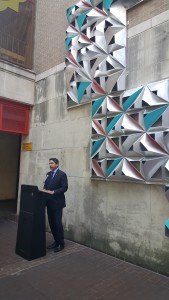 “I want to recognize the ingenuity and effort that the UTSA architecture students put into this project,” said District 1 City Councilman Roberto C. Treviño. “We are proud to showcase their artwork in our downtown public space. Public art brings people together and strengthens connections between people and the places they share.”

The UTSA artwork is the second of two student installations displayed as a part of the “Architecture That Engages” design showcase. Each student design team is responsible for designing, fabricating, installing and dismantling a unique architectural piece that engages the community and showcases architecture as public art. The project is sponsored by the City of San Antonio, the AIA San Antonio Chapter and Centro San Antonio. The first installation, completed by San Antonio College students, was unveiled on the Houston Street Garage in fall 2015.

“This semester, the students focused on designing an architectural installation that both celebrates our city’s future path and respects its deep, cultural heritage,” said UTSA Lecturer Armando Araiza, who guided the UTSA students project. “They began with a traditional architectural analysis of Houston Street, and expanded it to consider the entirety of downtown and San Antonio’s vast reach.”

The project, entitled Morf, is inspired by San Antonio’s progression into a modern, innovative city that keeps true to its heritage. The project is on display on the Houston Street side of the Houston Street Garage. The garage sits adjacent to the Majestic Theatre, and a limestone facade between the two facilities provides a blank canvas and exciting opportunity for innovation. This initiative is part of the City’s ongoing efforts to enhance the downtown parking experience.

While studying maps of San Antonio, the students chose points of interest that tell a story of the city’s unique history. Those points were then used to guide the project’s basic shape. In addition, the 16 aluminum tiles displayed were designed with the spirit of traditional, handmade Mexican talavera tile in mind: no two of the installation’s 128 truncated pyramids are alike. The project will be on display through fall 2016 on the City-owned Houston Street Garage.

Diverse, internationally connected and globally competitive, San Antonio has a vibrant culture and economy and is consistently ranked among the fastest-growing cities in the United States. America’s seventh-largest city offers opportunities in industries ranging from bioscience, financial services, aerospace, cybersecurity, energy and transportation manufacturing to healthcare. We are “Military City USA,” home to crucial military commands supported by a patriotic citizenry. We welcome 31 million visitors annually who inject $13.4 billion annually into our economy, and UNESCO recently designated the city’s Spanish colonial missions as a World Heritage Site. Celebrating its 300th anniversary in 2018, San Antonio is a city with a storied past and an even brighter future. For more information, visit www.sanantonio.gov.

About The University of Texas at San Antonio

The University of Texas at San Antonio (UTSA) is an emerging Tier One research institution specializing in health, energy, security, sustainability, and human and social development. With nearly 29,000 students, it is the largest university in the San Antonio metropolitan region. UTSA advances knowledge through research and discovery, teaching and learning, community engagement and public service. The university embraces multicultural traditions and serves as a center for intellectual and creative resources as well as a catalyst for socioeconomic development and the commercialization of intellectual property—for Texas, the nation and the world. For more information, visit www.utsa.edu.